These four tragedies have something in common.  They were all perpetrated by people who were known by those around them to be mentally ill.  END_OF_DOCUMENT_TOKEN_TO_BE_REPLACED

I just read about Alabama biology professor Amy Bishop’s shooting rampage that killed three of her colleagues.  Curious, I looked her up on RateMyProfessors.com, and found a few dozen reviews of her posted by former students.  Though there are some negative reviews, the majority are glowing, as seen from the screen shot below (I suspect the page will be taken down soon).  So she’s a homicidal maniac with a history of problems, but on the other hand, “she is hot but she tries to hide it.”

Note that the Boston Herald article linked above (also posted today at Drudge Report) mentions that she is “a far left political extremist who was obsessed with President Obama,” and the same student review I just quoted from (visible below) also shares this: “she is a socialist but she only talks about it after class.” 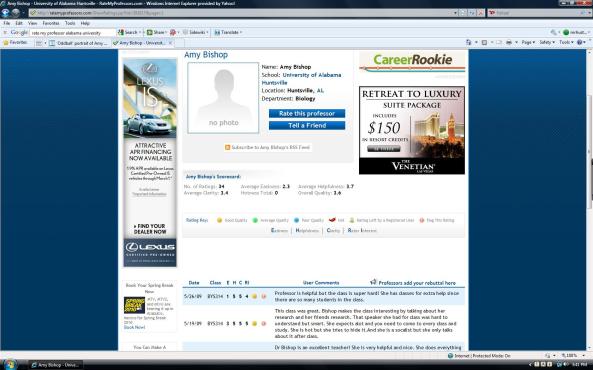 A police officer was shot by a group of young men as he came home from work two nights ago.  One of the young men is an 18-year-old junior and basketball player at Mojave High School, according to the newspaper.  Reading the comments section below the article, some people say that they know him and that he’s “a good kid,” including someone called “Mojave Parent” commenting at 10:10.

This reminded me of a similar tragedy here in Las Vegas three years ago: another basketball player at Mojave High School was part of a group that went around assaulting strangers on a spree one night.  After he was arrested, people came out of the woodwork to call him “a good kid.”

When Gerald Davidson shot and killed Chris Privett after school at Palo Verde High School a year and a half ago, I don’t remember anyone calling him a good kid, but I wouldn’t be the least bit surprised if someone did.

I have no further commentary than this: get a clue, everybody.

April 20, 2009 is the ten year anniversary of the Columbine shootings.  I was a junior in college that year, and heard about it in an afternoon class.  No doubt this dubious hallmark will be an occasion for a lot of hand wringing and navel gazing, but I want to add a few random comments that I hope are worthwhile.