After reading this great post about the ten books that most influenced an author over at First Thoughts (one of my favorite blogs) a few weeks ago, I’ve been working on my own list.  The list changed drastically over a few drafts, and I’ve been surprised by the final results.

These are not necessarily my favorite books (though many of them are), nor are they what I’d consider the best books I’ve read (though, again, some of them are).  These are the books that have most contributed to who I am today.  For better or for worse, these are the ones that stuck with me, changed me, that left some deep imprint impossible to explain me now without.

The only caveat here is that I decided not to include any scripture on this list.  For it to be accurate, they should be on here, but I ran into too many problems.  Should I count them all as one monolithic book called “Scripture,” separate them into Standard Works, or separate them even further into individual texts by author?  The more I broke them down, the more I had to wrangle with how to rank them.  It got too thorny, and I just decided to ignore that altogether for this list.

The original list at First Thoughts, along with many of the comments afterwards, cheated by doubling up on books and squeezing more than ten onto these “top ten” lists.  This draft has significantly fewer than my first couple, but I’ve still elected to cheat, also.  My top ten list has twelve titles.  If you really want to be a purist, cut off the last two.

I’ve listed them here roughly in order of just how much they’ve shaped me, and I’ve included the general period in my life when I read them. 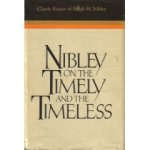 1.  Hugh Nibley, Nibley On the Timely and the Timeless (college).  This isn’t my favorite Nibley book (his Book of Mormon works or Approaching Zion would probably get that nod), but this “greatest hits” collection deeply impressed me at the time with its range of classical literacy to social criticism to studious, spiritual discipleship.  It was the first Nibley book I read cover to cover, and started me on the path to the rest of his oeuvre.  The way that I read scripture, study history, and understand the practical relations between things ancient, esoteric, and pragmatically modern are all heavily influenced by his life and work (though, since reading his biography–which I took with me to read on my honeymoon because it had just come out and I couldn’t wait to start it–I have attenuated this idolizing a bit and tried to expand my circle of influence).  Undeniably, his books have had more of a profound effect on me than any other.  I bought an old copy from E-bay several years ago…right before it was reprinted in a new edition.

2.  Hopkins and Sugerman, No One Here Gets Out Alive (high school).  I owe this one to my older brother.  Like all boys, I worshipped my older brother, so when I was old enough to emulate his adoration of classic rock, I followed suit.  I came across this biography of Doors frontman Jim Morrison and devoured it.  For a moody, pretentious adolescent, it provided a role model worthy of my own egomaniacal imagination.  This book’s influence reached far beyond my devoted memorizing of every note on the legendary Best of the Doors two CD set.  Even back then, I would read biographies with an eye especially keen for what great people had done at my age.  Morrison had been, above all, a voracious, even a ferocious, reader, and a nascent poet.

My own forays into poetry reading and writing were not terribly productive (though I still like The Lords and the New Creatures), the titles and authors cited by Hopkins and Sugerman as formative on Morrison–James Joyce, Jack Kerouac, the Romantics and French Symbolists–became my bread and butter for years, and sprouted branches of further influence that still dominate what I read today.  Though I certainly no longer emulate Morrison or his lifestyle, I can’t deny that this book has had a huge impact on me over the years.  Just last week I was flipping through radio stations and heard “L.A. Woman,” and I fondly paused to listen to some of it.  This book may be dormant, but it is in my DNA.  END_OF_DOCUMENT_TOKEN_TO_BE_REPLACED 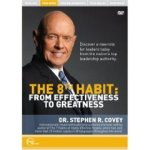 I’m a 7 Habits guy.  Though it’s been about eight years since I read The 7 Habits of Highly Effective People, its impact on me has been indelible.  For the first couple of years after reading it, in fact, I would stop myself before starting many activities and ask myself, “Wait, is this really a quadrant two activity?”

So I was excited about the release of The 8th Habit, which I’ve checked out of the library a few times…but haven’t really been able to get into.  A few weeks ago I saw that Covey had recorded a lecture of himself teaching the 8th habit to an audience, so I checked that out, hoping a visual abbreviation would help me get the gist of it.  Even better, the version that I picked up had an audio version on CD, and since my time to listen to things in the car is far more substantial than the time I might find to watch things at home, I cheerfully popped the CD into my car and listened to the whole thing in one day.

It.  Was.  Terrible.  The whole presentation reeks of touchy-feely affirmations with vague, watery, new-agey platitudes that have little utilitarian value.  What I’ve always liked about the 7 Habits (and I presume what millions of others also appreciate) is its practical, down-to-earth applicability.  This one comes across as a whole lot of bloviating puff about some simple, obvious concepts (“serve and inspire others”), some of which are already well defined in the original 7 habits (“set goals”).  This 48 minute lecture of weak fluff is supposed to represent the essentials of the 8th habit?  This does not do anything for my desire to finish the book.

I’ll be proactively shunning this waste of time for the foreseeable future.  If anyone wants to defend the 8th habit book, please do–I’d hate for my opinion of Covey’s work to be so sullied as it is by this embarrassing tripe.