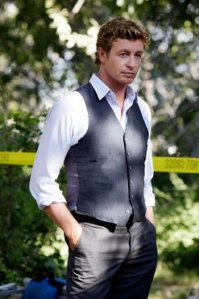 I recently read a movie review that pronounced the death of PG-13 comedies starring unusual characters and the rise of the raunchy, R-rated adult comedy. That may be true in theaters, but on the TV screens of America’s homes, the unusual character is stronger than ever.

Think House, think Monk, think Grissom on CSI, or any of a ton of other unique personality-driven shows. Last season, I was impressed by the savant-like quality of the innocently antisocial Sheldon on The Big Bang Theory, but now the crown for best new character goes back to a drama.

Patrick Jane is a great character.  Though the advertising for The Mentalist sells him as a latter-day Sherlock Holmes, his powers of observation take a back seat to the sheer audacity of his harmless brashness.  Simon Baker as Jane is instantly likable, but in the way a politician or car salesman is: you know you’re being manipulated by a pro, but they’re just so good at it you don’t care.

As the season has gone on, however, Jane’s back story has added a compelling depth to the character.  It’s not just Jane’s cheesy megawatt smirk that endears us to him, it’s his apparent struggle to keep up his life in the wake of the tragic murder of his family, and then it’s moments of pure surprise that end up fitting into that frame perfectly that keep us fascinated by this new man in our head.

In one episode, Jane gives voice to what we had just been led to wonder about him when he looks at his superior and says, bluntly but totally without malice, that when he finds his family’s killer he’s going to do to him what the killer did to them.  It would have been chilling had it not sounded so reasonable, put so easily out in the light like that.  Jane makes revenge seem not only reasonable, but nice.

However, that same episode revealed a possible weakness of the show.  The camera likes to do our work for us.  When Jane is looking around for details inside the trailer of a mentally challenged man who might be involved in a murder, we zoom in on a copy of Moby Dick hidden on a closet shelf.  Hmmm.  That’s not right, we think.  What’s a mentally retarded man doing with Moby Dick?  Of course, the suspect is faking it, but we already knew that–isn’t that the only logical explanation for the book?

Also in that December episode, another suspect gets locked in a barn and appears to be threatened by a shadowy figure who might be a murder victim who survived.  The figure’s approach even closes an act and leads to a commercial break.  Naturally, we know that the figure is actually Jane in disguise, tricking the suspect into a confession, if only because it doesn’t make narrative sense to have such a long, key scene late in an episode leave out the main character.

Hopefully such stumbles won’t become par for the course in what is becoming such an intriguing story.  Last night’s episode made me want to know more about the “Red John” story arc, and it ended on a solidly Holmesian note: a brief, taunting phone call is made to Jane from an unknown location, which he immediately figures out is a hotel in Tijuana.  His clues–the noise in the background (indicating the thin walls of a hotel) and the villain’s access to a phone, among others, are undeniably clever.  (I’d add that the bad guy also ended his call with “Vaya con Dios,” and since he has no apparent Hispanic background himself, it makes sense to think that he was calling from a location where he was surrounded by a Spanish influence.  But that’s neither here nor there.)

Such quick bits of observational derring-do, and the even more present employment of little psychological tricks to get people to say and do what he wants, make Jane a detective to keep our eyes on, and a character to keep our minds sharp.

And maybe this will be just the thing we need to bring vests back in style.