I’ve been reading James Ferrell’s The Hidden Christ, which is extremely excellent, and I just read chapter 19, “The Dispensation’s of the Lord’s People,” where he gives a chiastic chart of Earth’s history.  It’s very good, and it reminded me of something I’ve been thinking about for a month or so, since my wife and I had a discussion about what the Earth will be like after the Second Coming.

That got me to researching, and some things clicked with me.  Below are some notes I’ve been putting together about these thoughts.  They represent my attempt to put some doctrinal concepts in a recognizable pattern, and it strongly emphasizes the role of Jesus Christ.  In fact, looking at our spiritual journey this way adds a powerful dimension to our understanding that, through the Atonement, Christ “descended below all things.”  We can see here that, literally, his suffering and distance from the Father were absolutely beyond even the worst of mankind’s experience.  It was also, again quite literally, the ultimate turning point in history.

The only thing that confused me at first was the idea that, if Eden and the Millennium are Christ’s domain, then how could the Father also be present in the Garden of Eden?  I soon realized that God may go anywhere He wishes; it is we who are limited by veils and sin.  After all, didn’t both the Father and the Son appear personally to Joseph Smith in this fallen, telestial world?  Joseph Smith had to be transfigured for that to be possible, and I suppose Adam and Eve must have enjoyed a similar experience, in their innocent and immortal state, to behold the Father in the Garden.

On a slightly less spiritual note, this map also highlights an aspect of good storytelling, which has also been on my mind lately.  I often think that basic story patterns are essentially encoded into us (think of Campbell’s Hero With a Thousand Faces, as well as the fondness for using elemental stories to resonate with us in the scriptures and temple), and one of the most fundamental aspects of good story is that the hero must face a daunting, scary setback in the middle, even suffering a literal descent.  Think here of Odysseus going down to Hades, the discouraging tones of The Two Towers and The Empire Strikes Back (each the middle of an epic), or the predictable fight that the lovers must have in the middle of every romantic comedy, before they reconcile and reunite (sappy, but also another Atonement-centered device).

Most of the “insights” on this chart aren’t very original, but I enjoyed drawing it up to see these things together in graphic form for the first time.  This is only a rough draft, and any refinement to it is welcome.  Click to enlarge.

The Pearl of Great Price itself is a fascinating text, and ironic.  By far the smallest of the standard works, this tiny anthology is not a series of testimonies, a record of covenants, or a detailed collection of exegesis and exhortations, like most other scriptural works are.  No, The Pearl of Great Price is far too ambitious for that.  Just about the only thing it does is reveal the most important saving truths of eternity, connecting us directly to the Lord.

Consider that in the Doctrines of the Gospel manual for church classes, the Pearl of Great Price, which comprises less than 2½% of the standard works (61 out of 2475 pages), represents about 10% of the scriptures cited in the index (nearly a whole page out of nine and a half printed pages), an impressively disproportionate total.  If The Pearl of Great Price were a basketball player, it’d be one foot tall and five times better than Michael Jordan.

I labor this point because it relates directly to the use of astronomical information in The Pearl of Great Price’s Book of Abraham.  These often confusing ideas about space and time are not a primer for astronomy as much as they are meant to add to our understanding of those massive spiritual truths with which this volume was designed to enlighten us.

I’ll cut to the chase: The Holy Secret is a disappointing follow-up to James Ferrell’s superior book, The Peacegiver.  They share much in common: both books are short and simple; both are parables about improving our relationship with God by being reconciled with each other; and both take the form of a wise old man mentoring an earnest but flawed protagonist. 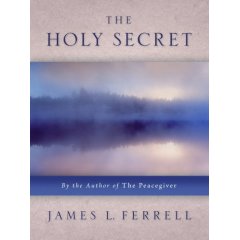 It’s easiest to approach this one with a list of pros and cons.  First, the bad news:

Ferrell’s book has some positive points, but someone looking for a rejuvenation of faith or a refreshing analysis of scripture (or, preferably, both) would do well to look elsewhere.  Holland’s Christ and the New Covenant would fit the bill quite nicely.