My suggested personal study aids for this week. (I’ll try to post earlier in the week from now on.)

Lesson objective: “To help class members see, through the examples of Lehi and Nephi, that safety and salvation come through obedience to the Lord.”

When my family studied 1 Nephi 1 together this week, we stopped in verse 4 to check out the references in footnote d. Two of them go to Jeremiah.

With that in mind, I first want to recommend this movie:

Checked this out from the library a while back and really enjoyed it.  This drama not only has better production values than most small, Biblical movies, but it even stars future Grey’s Anatomylead Patrick Dempsey, to boot.

Jeremiah tells a vivid story of the Old Testament prophet’s reluctant, melancholy rebellion against a corrupt and complacent status quo, and keeps the major narrative very faithful to the Biblical text.  Dempsey shines in this role; his acting strong suit has always been an uncanny ability to convey betrayed surprise–the hurt look on the face of a lost puppy dog.  That woeful innocence comes in handy a lot as he portrays the saddest prophet in Israel’s history.

Latter-day Saints have a special soft spot for Jeremiah, I think, as the Book of Mormon suggests that he was a contemporary of the first patriarch in that sacred text, a man named Lehi, who likewise foretold doom in Jerusalem and was violently rejected for it.  One can easily imagine Lehi preaching just around the corner in most scenes of this film.

The few shots of violence are tasteful and true to the source material, but perhaps a little too intense for the youngest viewers.  Other than that, anyone with an interest in Biblical literature, history, or belief would be better off for seeing Jeremiah.

Speaking of 1 Nephi 1, I like to picture the structure of things I read, as it helps illuminate for me the author’s intended messages more clearly. The following arrangement of verse 1 shows just how much information is packed into that first sentence: six factual statements about Nephi–three paired clauses describing who he is and how he got to be that way, and all meant to explain why he’s making this record; only that last of the six statements shows an active choice on Nephi’s part: 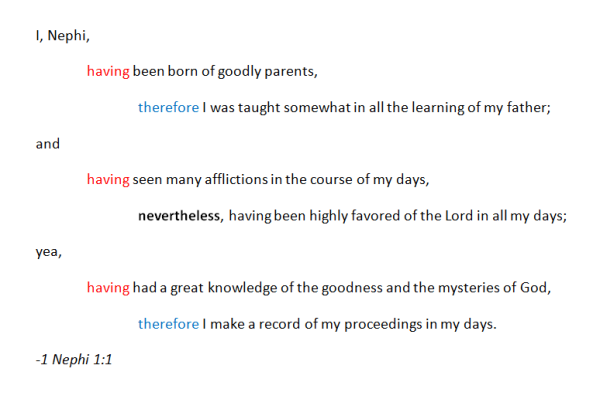 Also, these two posts about the Book of Mormon come highly recommended:

And, of course, I must urge you to keep up with the development of Book of Mormon Central this year. If it lives up to its potential, it’ll be a fantastic resource.

One comment on “Book of Mormon Gospel Doctrine Lesson #2”