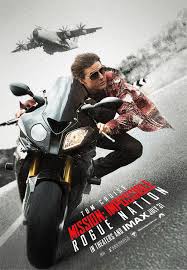 I think we can all agree that the only really bad film in the series has been the second one. What garbage that one was! I didn’t like the original when it came out, either, but upon rewatching it last year, I was surprised at how well it had aged. Or maybe it was because of how well I had aged. Either way.

If I had to summarize what makes Rogue Nation work so well, it would be this: loyalty vs. subversion. RN works in commentary on a few themes, but none so much as loyalty.  It does this both by bald exposition and by narrative subversion, contrasting the two ideas.

(And I like my popcorn flicks to have just a little of that substance to them, and good action movies these days do it quite well, embedding the ideas they illustrate quite organically, and making those ideas more meaty than those in an after school special, but not exactly trying to be Nietzsche. Chris Nolan is also very good at this–The Dark Knight Rises is even better than most people gave it credit for.)

The subversion in Rogue Nation is both a plot point and a narrative method–nobody likes supposed mysteries that cheat you with contrived twists or random reveals, but those here are neither. I like how the subversion isn’t just the inevitable betrayals that we see in the MI franchise’s stories, but direct the viewer to examine their own conception of the format. This starts with the trailer, which very cleverly misdirects us.

On the commentary track for an old Simpsons episode, the writers talked about how consciously they tried to do that with the series, to subvert expectations in a way that illuminated for the audience expectations they didn’t know they had. That’s the source for a lot of the show’s classic humor. Such a technique is used here for suspense and resolution.

It should be noted at this point that Chris McQuarrie, who wrote and directed this movie, also wrote The Usual Suspects.

[One more comment, but it’s a big spoiler, so don’t scroll down unless you’ve seen the film.]

When the YouTube channel CinemaSins eventually does “Everything Wrong With Mission Impossible: Rogue Nation,” at the point when Tom Cruise says, “We have to kidnap the prime minister,” they need to follow it with an audio clip of Nic Cage saying, “I’m gonna kidnap the president of the United States.”