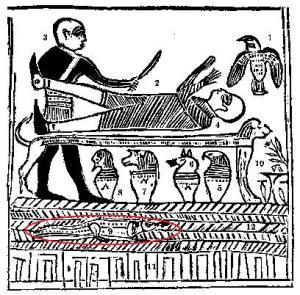 I’ve been studying up on the Book of Abraham a bit lately, and as fascinating as all the scholarly, arcane parallels are, it’s even more exciting to see that some of Joseph Smith’s explanations of these symbols are easy to confirm in accessible pop culture.

While critics have often had to come up with convoluted theories as to how Joseph got so many plausible details into the Book of Mormon, his equally startling “guesses” in the Book of Abraham are usually ignored…maybe because they are even more shocking.  How could Joseph have known what any of these old Egyptian hieroglyphics meant?  He didn’t know ancient Egyptian–hardly anybody in the world did!  The Rosetta Stone itself had barely been translated around the time that Joseph first started producing the Book of Abraham.

And yet, what should have been wild shots in the dark hold up remarkably well nearly two centuries later, when the basics of Egyptian are so widely available, that a major hotel here in Las Vegas, the Luxor, makes them into a cute and easily recognizable theme.

In Facsimile 1, there’s a weird creature shown near the bottom.

The text defines it as “the idolatrous god of Pharaoh.”  Look closely–it’s a crocodile in the waters of the Nile.  So, did the Egyptians of Abraham’s time really identify Pharoah with a crocodile-god?

They sure did.  His name is Sobek, and here’s what one Egyptologist wrote of his connection to Pharaoh, after showing how many of the kings around Abraham’s day even named themselves after Sobek:

The crocodile’s power to snatch and destroy it’s [sic] prey was thought to be symbolic of the might of the pharaoh – the strength and energy of the reptile was a manifestation of the pharaoh’s own power. The word ‘sovereign’ was written as yt. This way, the crocodile – and thus Sobek – was linked to the pharaoh, the sovereign of Egypt. 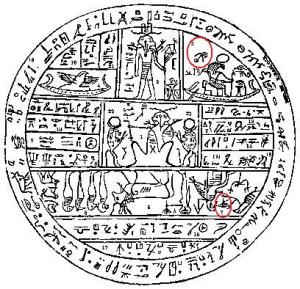 In Facsimile 2, an even more famous Egyptian symbol appears–you’ve probably seen it in movies countless times.  The Eye of Horus, or the Wedjat eye, appears twice here, as figure 3 and figure 7.  Joseph’s footnote for each connects the symbol to aspects of the gospel that are very sacred for Latter-day Saints: “the grand Key-words of the Holy Priesthood, as revealed to Adam in the Garden of Eden” (figure 3) and “revealing through the heavens the grand Key-words of the Priesthood” (figure 7).

So, again, does legitimate Egyptian really connect the Wedjat eye with the kinds of things Joseph said it does?  For the answer, I turn to no more a scholarly resource than Wikipedia, whose introductory definition of this symbol says, “The Eye of Horus is an ancient Egyptian symbol of protection, royal power and good health.”  Those three elements being the primary association of a symbol that Joseph Smith connected to the “key words of the priesthood” cannot, to my mind, be a coincidence.

The Book of Abraham is many wonderful things, including a solid evidence of the prophetic gift and calling of the Prophet Joseph Smith.